The ceremony of the UNESCO – CMAS Dive for Peace Day in Dakhla was celebrated on 24th of October 2014. The event took place under the patronage of the Moroccan Ministry of culture , which gave the permission to dive at the wreck of “Kaiser Wilhelm der Grosse” from the 1. World War.

The operation was supervised by Mr. Karra Azzeddine, responsible for underwater archaeology in the Moroccan Ministry of culture.

The invitation of the team from CMAS was pronounced by the President of the Association Salam, Mr. Ahmed Bazaid Cheikh el Mami. The association was also responsible for the organization in Dakhla.
From CMAS the Director for Underwater Cultural Heritage, Mr. Gerd Knepel and the underwater archaeologist, Mrs. Michaela Reinfeld came to Dakhla to take part at the ceremony.

The Meeting of States Parties to the UNESCO 2001 Convention on the Protection of the Underwater Cultural Heritage decided to organize special remembrance and scientific activities devoted to underwater cultural heritage from World War I on the occasion of the conflict’s centenary. A special public event in this regard will be a “Dive for Peace Day” organized worldwide and starts at 28 June 2014. It is supported by dive clubs and dive institutions worldwide.

This event is open to every diver from professional to occasional and recreational divers. Divers are encouraged to take part in commemorative dives to discover the submerged material remains of the First World War. Tangible heritage sites and their artefacts represent a unique access to the past and allow enhancing knowledge and understanding of our history.

World War I underwater cultural sites bear witness of human tragedies generated by this international conflict and remind humanity of the need to preserve peace. Many of them are however today threatened by treasure-hunting and metal recovery. The visits to significant submerged World War I sites shall call attention to this situation.

Divers are invited to refrain from any behavior that may cause damage or pollution to the underwater cultural heritage during their visit. Emphasis shall be put on respectful, cautious and appropriate behavior towards this heritage, its meaning and its character as heritage site, but also as grave site.
All divers are encouraged to document their participation with images, videos, and first-hand accounts and make them available online, as well as in dive clubs, diving centers and federations worldwide.

The “Kaiser Wilhelm der Grosse” was build in 1897 at the Vulcan Warf in Stettin. It was a nearly 200 m long passenger ship and for a short time the biggest and fastest ship between Europe and America.

With the beginning of the 1. World War in 1914, the ship was rebuild as a help cruiser and the Imperial German Navy installed six old 10,5 cm guns on the ship. On 4th of August the modification was finished and the “Kaiser Wilhelm der Grosse” started from Germany to its operation area at the coast of North Africa. On 26 August 1914, the “Kaiser Wilhelm der Grosse” anchored in the bay of Rio del Oro. The ship needed coal from the three cargoships which were sent by the German Navy. During the loading process the british cruiser “H.M.S. Highflyer” appeared and a battle between the ships started. After 90 minutes the “Kaiser Wilhelm der Grosse” finished its munition and the crew started to leave the ship. Captain Max Reymann gave the order to sink the ship. Fortunately, no men died during the fight but it was the first loss of a battleship from the German Navy in World War I.

The ship was countersunk by its crew after a fight with the british cruiser “H.M.S. Highflyer” on 26 August 1914. It was located near the coast and some parts looked out of the water for many years. In 1952, the wreck was broken up by a scrap company. 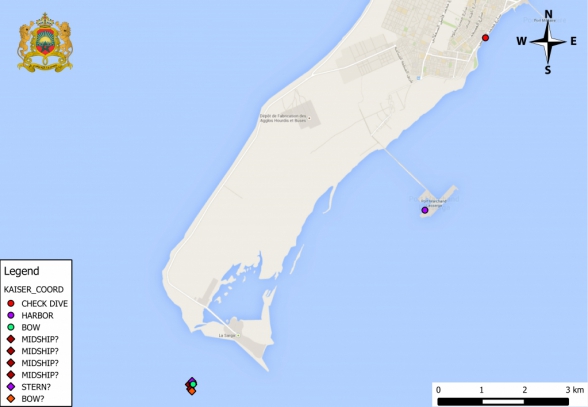 After several formal and informal meetings with the responsible persons from Moroccan Ministry of culture in Rabat and the local authorities in Dakhla ,we got ready for our first dive.

Six divers were in our team:

On October 23, we started with a checkdive for al divers to get used to the special conditions of the underwater environment of the Atlantic Ocean. We went into the water in front of the Bab Al Bahar Hotel in Dakhla and stayed together in the water for nearly half an hour. There was current because of the tide and the visibility was very bad. 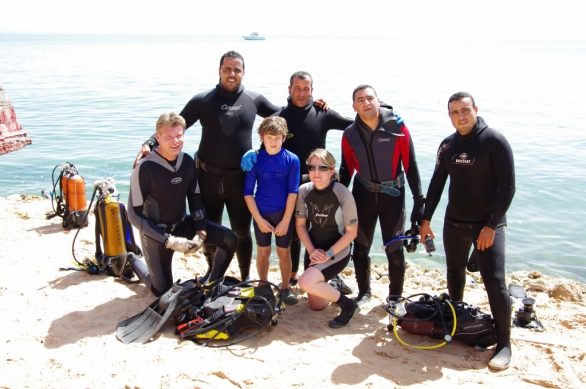 On October 24th the team met at 10.00 am in the port of Dakhla. We decided to visit the part of the wreck with the name of “...... Wilhelm der Grosse”. We were using two boats, one zodiac and one big boat for the equipment and al team members.

The team with the zodiac started first. They located the wrecksite and placed a rope on the wreck when the current was not so strong. The GPS-position was taken again.
At 01.25 pm the diving team started to visit the wreck of “Kaiser Wilhelm der Grosse”. The part of the wreck was located between 8 and 23 m depth. During the dive, pictures were taken from the letters “...... Wilhelm der Grosse”, the wreck and the divers.

Letters on the bow with name of the ship: [KAISER WILHELM DER] GROSSE. (Foto: G. Knepel) 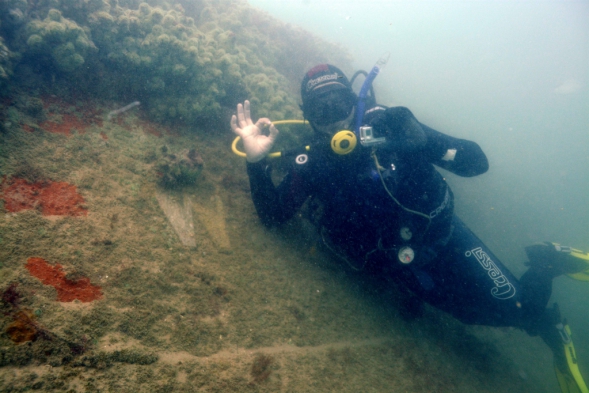 Finally, we attached the blanket “Dive for Peace Day in Dakhla” to celebrate the ceremony of the Dive for Peace Day. After 45 minutes we finished the dive and left the wrecksite.
The final of the event was a press conference on October 25th in Dakhla.

Banner of the Dive for Peace Day (Picture: SALAM Association) 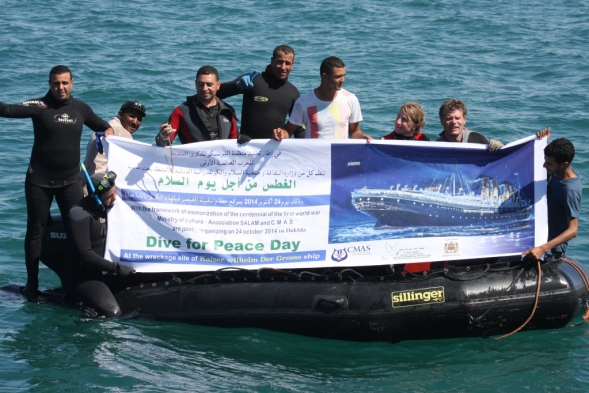 For their kind permission and support we would like to thank Dr. Lotfi Mrini, Dr. Abdellah Alaoui and Mr. Khayya Med Laghdaf from Moroccan ministry of culture. We also thank the Association Salam for their invitation and organization in Dakhla. Moreover, we owe great thanks to the german Ministry of Foreign Affairs in Berlin, the Maritime Museum in Bremerhaven, the Société Rioconsigne, the Société Scafandrie and the Société Sahara des Activités Subaquatique (SSAS).