Development of Cmas in Djibouti: the vice-president of the Cmas is received by the government of Djibouti in November 2017 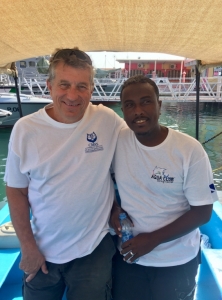 In Djibouti, CMAS Vice President Jean-Louis Blanchard spoke at length with the Secretary of State for Youth and Sport, Hassan Mohamed Kamil, about the development of the Djiboutian Federation of Underwater Sports, recently affiliated to CMAS.

Work consolidated for many years, which is based first of all on the friendship that the Vice President of CMAS maintains with his counterparts in Djibouti.

An agreement was signed in the presence of the Minister.

In addition to training at the level of diving instructors, the goal is to lead shortly training actions aimed at developing the practice of  finswimming , and also free diving.

In addition to another place, the Djiboutian National Tourist Office (ONTD) hosted a launch ceremony for diving training for young Djiboutians.

This ceremony saw the presence of several members of the government. These include the Secretary of State for Youth and Sports, Hassan Mohamed Kamil, the Minister of Health, Djama Elmi Okieh, who had by their side Mohamed Abdillahi Waiss Secretary General of the President of the Republic and the Director of the ONTD, Osman Abdi Mohamed.

The Secretary of State for Youth and Sports has emphasized the importance of this type of training for young Djiboutian: "the government is working to effectively combat the scourge of unemployment through the multiplication of offers of training in all sectors, "he said in substance.

Jean-Louis Blanchard Vice-President of CMAS and Ibrahim Mohamed Abdou President of FEDSS  were very satisfied with these days.

CMAS in the Paris Dive Show

Pilot School for the “Blue Helmets of the Sea” Project